16th March 2017 – Sipral is going to take part in construction of AFI Vokovice, a new administration centre and deliver a glazed facade for it. The building will be situated in Prague on the border of Vokovice and Veleslavín, within easy reach of the city centre and the international airport.

Mainly office complex designed by DAM architekti studio consists of two buildings of six and eight floors will offer also retail units, storage area and spaces aimed for catering establishments. On the roofs of both buildings as well as in close vicinity greenery will be planted and general landscaping will take place. The facade of both buildings will be combined of glass and modern glass-fibre cement and aluminium elements. Its expressive plasticity with curved course will provide distinctive appearance to the whole complex. Shading will be provided with exterior roller blinds. Fresh air will be supplied to all spaces through opening window gaps.

„Buildings are designed to be energy saving and are about to be awarded LEED Platinum certificate. They communicate with each other visually and are based on the same shape design and identical materials. At the same time they complement each other well – the higher building B facade supports verticality of external corner with its narrower inter-fenestral pillars and contrasts with a calmer mass of the back A building,“ said Jiří Vlasák, the project investor of AFI EUROPE.

AFI EUROPE, a developer started the construction in October 2016, GEMO OLOMOUC is a general contractor. Completion of AFI Vokovice is expected in August 2018. 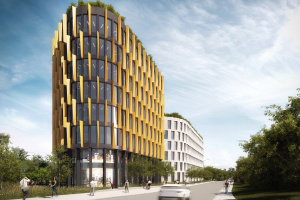 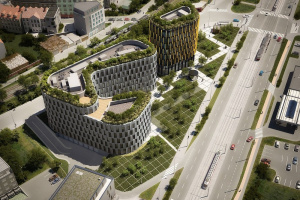