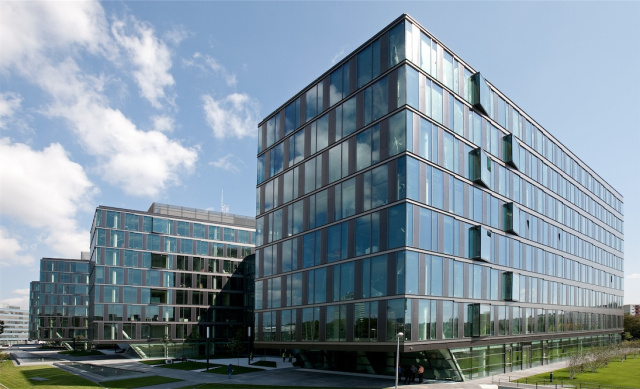 Digital Park is a modern administrative complex, strategically placed by the main transport route to Bratislava, Einstein street. Its construction was divided into three stages, during which the total area exceeding 73 000 m2 was built up. On eight above ground floors there are office spaces, there are restaurants and a café on the ground floor and parking spaces in the underground. Sipral supplied a light peripheral envelope of the buildings designed as element facade for this project.Architectonic concept of the second and third stage designed by Jakub Cigler and Vincent Marani from Cigler Marani Architects, a.s., is based on clear mass concept of equally high and mutually connected trapezoid buildings. In the surrounding ill-assorted development the mass concept such defined creates a distinctive and proportionate structure reacting to a scale of the existing urbanism. The design was aimed at planting the buildings in a park. Also the concept of traffic solution was subordinated to this. Large parking spaces are hidden in the uderground areas of the buildings and foreland is strictly solved as a park with walkable areas, greenery and water elements. Digital Park buildings are composed of simple glazed trapezoidal buildings. These are turned against each other reacting to irregular shape of the land defined by a railway from the southern side and important communications from the northern and western side. The concept is based on openness to the surroundings, that is why a park – a new urban space that makes the environment more pleasant for the premises themselves as well as wide public.The building is based on the orientation against the city center and Bratislava Castle with its trapezoidal design of the individual masses  as well as the facade concept. On the northern side towards to the city center the facade is open and more glazed. On the southern side it is more enclosed against Petržalka housing estate. At the same time the design takes into account influence of heat gains of the building from the solar radiation. On lateral sides the ratio of glazed and full areas changes which brings a dynamic element into the whole composition of the building. It is then further developped in partial architectonic units – in the entrance lobby, landscaping etc.The light envelope was used on all six piers of the building as well as connecting links and is designed as made of elements. Individual elements are completely manufactured in the fabrication plant and transported to the site. On the site these are hung on a system of anchoring elements. This type of cladding enables to increase the quality because all components as well as the whole module can be checked directly in the fabrication plant and the installation is fast and effective and we are not much dependant on the weather. It also eliminated the need of scaffolding.The system of cladding was developped as tailor-made specially for this order. A module typical size is 2,7 x 3,9 m. The bigger width of modules enabled to optimize number of anchors, transport and installation times. Modules have the opening part inserted in the full part not the glazed one, which is quite non-traditional. In the exterior part the modules are clad with composite boards and varnished steel sheets. In course of the cladding design preparation it was necessary to take into consideration not only aesthetical, structural and acoustic demands but also technological optimizations so that we could deliver the facade within the required time. The speed required for the installation was approx 9000 m2 a month. That was the reason why individual inserted elements were designed as independent units assembled separately and then inserted into final modules. This conceptual design enabled us to produce daily nearly 300 m2 of cladding on one of three assembly lines.In some places there are three-dimensional modules, so called bay windows, inserted in the element facade area. For design of these bay windows, as for all element facades, there was used the SolidWorks 3D software. 3D models of modules were used for structural and thermal evaluation, analysis of technological processes of fabrication as well as fabrication itself. In fabrication there are the 3D models are processed and then sent directly to the machining centers.The modules are interesting because of their non-traditional way of opening – the parts that open are non-transparent parts made of panels, glazed windows do not open. Face of modules is clad with composite boards and varnished sheets.The modular type of cladding is completed with semi-structural stick-system facade in a part of building’s parterres.In the place of entrances where the facade is self-supporting over two floors there is used so called Aufsatz system – a system of clipping on the steel under-construction.