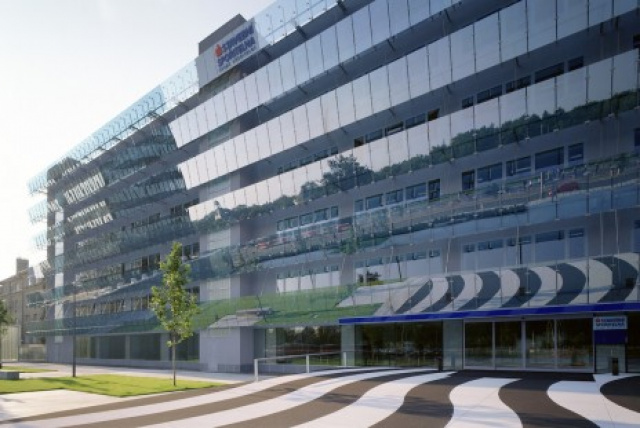 In the immediate vicinity of the former Strojimport high-rise building, opposite Olšany graveyards a modern building of ČS Stavebí spořitelna (Savings and loan association) was created by reconstruction of a building from 1948. The originally featureless seven-storey building got an absolutely new aspect. On the northern facade there was used a set-off glass and steel construction that catches your attention with its lightness and airiness. There are six inclined ribbons of light-blue glass that reflect the current happening on Vinohradská street, as well as a spectator´s position. The set-off facade formed the main part of a complex delivery of the building facade envelope that was provided by Sipral. Apart from this we also delivered Schüco window systems for all floors, semi-structural glazing of the parterre, expanded metal cladding of the plinth on the southern facade, copilit panes on staircase rooms, parapet cladding and automatic door of the main and side entrances and door space. 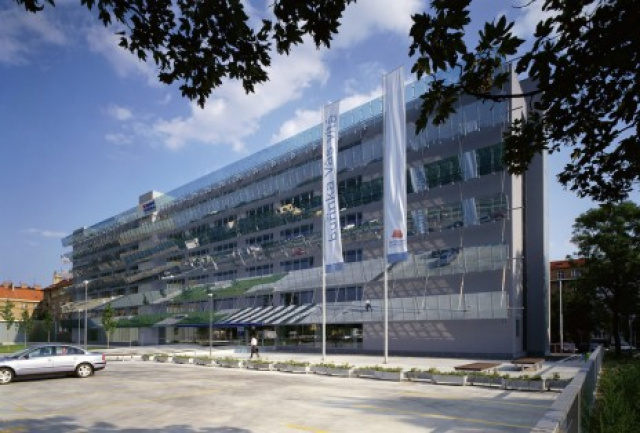 Works started with precise demarcation of the former envelope planeness – before we started installing anchors of the set-off facade on the northern side it was necessary to know the exact deviation of the former northern side of the building from the plane. We had to demolish, enlarge and widen the original window openings into which we inserted a new Schüco RS65 and FW50 window frames. Outer edge of window frames defined the future area of the warmed-up facade – the frames are flushed with the facade. The originally closed parterre was made free and opened entirely towards the street thanks to the reconstruction. 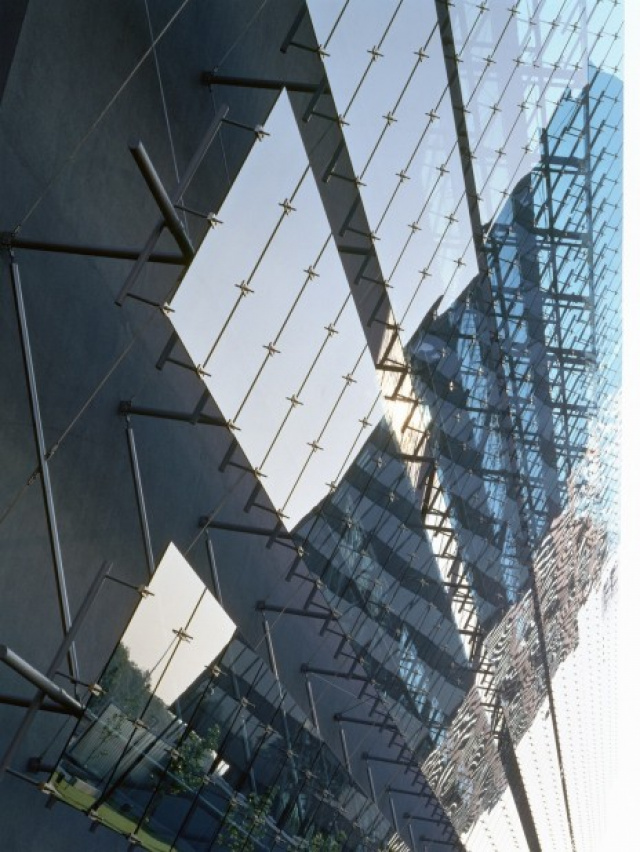 The whole pre-suspended facade is fixed to a steel construction of six horizontal rows; each of them is carried by struts mounted on anchors in the facade. The struts also hold a horizontal steel tube on which there are big E profiles fixed and equiped with stainless threaded bars with fixtures for glass panes. Construction of each ribbon is carried by tension rods and braced in the opposite direction. There were 534 Stopsol blue glass units (0,96 x 1,93 m) used for six facade ribbons; nearly 1000 m2 in total. Fixing of pre-suspended facade anchors in the existing bearing skeleton of the building was quite demanding since this was packed with steel reinforcement – originally we wanted to fix the anchors chemically but finally we had to weld them. For instalation of the pre-suspended facade it was necessary to put up two sets of scaffolding – one very close to the facade and the second one as a more pre-set one. In between them a whole ribbon was installed, painted and glass panes were attached. Then a part of the scaffolding was removed and the same procedure was repeated on the floor bellow. To meet the deadlines it was necessary to coordinate continuously work of approx. 20 workers of different professions – scaffolders, steel installers, glass installers and others. The compact spatial grid of the steel construction of the facade can be seen only when the building is entered – when looked at from the street the grid is safely hidden by reflection of pre-suspended facade glass ribbons.

Unlike the northern facade the southern one looks very modest and corresponds with aspect of the surrounding apartment houses. Similar to the northern facade here also were Schüco RS65 window frames used and they flush with the facade. The facade is southward orientated and that is why all windows are protected with external aluminum louvers that are controlled with Digisonic central unit which continuously evaluate rate of insolation and wind power. In contrast with the very transparent glazing of the northern facade parterre the parterre to the Kouřimská street is semi-structurally glazed with high reflection and light non-transmittance. Right behind the glazing there is a space where clients of Savings and loan association are welcomed and they must be protected from eyes of passers-by. Bottom part of the facade between semi-structural glazing and a side-walk is covered with a varnished expanded metal specially shaped according to Kouřimská decline. It was also necessary to design special details of the expanded metal around entrance to the underground garrages.

On the fifth above-ground floor where there are spaces of the branch management the northern facade was glazed with extremely big sized safety panes of Connex 8.8.2 for a height of a floor without attics. So from this floor on the northern side there is a wide and „luxurious“ view of Vinohradská avenue and greenery of Olšanské graveyards. Attica is substituted by the last glass ribbon of pre-suspended facade, that at the same time obstructs direct view towards the square in front of the building. A feeling of safety is emphasized here with placement of internal railing that does not allow access to the facade envelope. Towards Kouřimská street this floor recedes partially and in such way a shallow terrace with a wooden walkable grid lined with a high railing is formed.