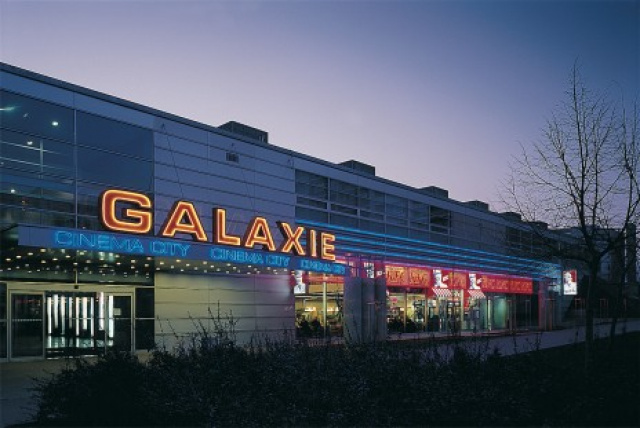 Situated near the metro station Haje, the new building for the nine-auditorium Galaxie multiplex leads towards the Haje shopping precinct where the original Galaxie cinema was located. Thanks to the grass-covered slopes enclosing it from two sides – creating the impression of rising directly from the ground – it is a remarkable and truly futuristic structure, one adding life and animation to an otherwise dull urban housing estate. The exposed portions of the building consist of facades supplied – together with some interior structures – exclusively by Sipral. On approximately the same area (ca 950 m2), there are two kinds of facades: a glass grid facade (the Schüco system) and a facade of aluminium sandwich boards (Alucobond). The first facade type is used on the main (eastern) facade facing the small square in front of the shopping centre, and on the southern facade facing the old cinema building. These facades differ only in the method of glazing. The eastern facade is divided lengthwise into three different strips: the bottom contains display windows, while above them runs spandrel with corrugated sheet cladding. The uppermost strip, with its attached neon lighting units, consists of fixed glazing interrupted with a line of tilt windows. On the southern facade, containing the service entrance, strips of insulating double glazing alternate with strips of matte aluminium panels. The curved south-western corner of the building is possibly evocative of nautical associations (thanks to the horizontal striations and the material used), such as a captain’s bridge or a ship’s prow. An insulated and partially ventilated facade of Alucobond is used on the northern and western side of the building. Facing quiet residential districts, these sides are not tinted the typical silver-grey but deep blue and in conjunction with the greenery of the inclined slopes provide much-needed colour for the area. The atypical canopy suspended above the main entrance and the glazed interior walls were included in Sipral’s contract. The largest of them rises above the cinema’s entrance passage between the main and back entrance. The entrances into multi-cinema each contain two pairs of automatic doors.