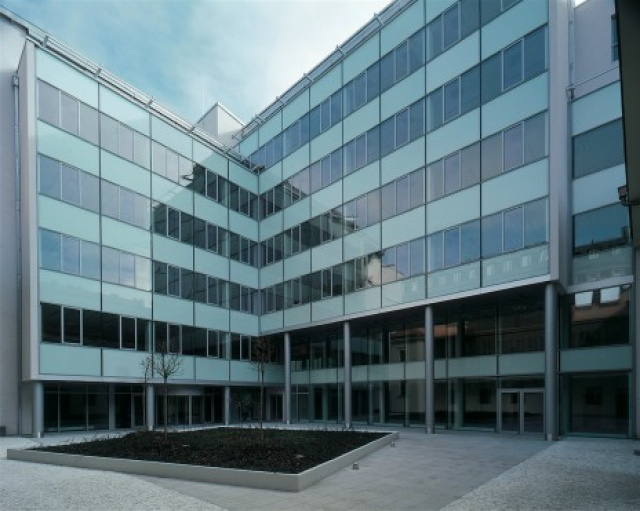 In spite of its location only a few hundred metres from Wenceslaw Square, the “Breda courtyard” lies in a quiet area between the streets Olivova, Ruzova and Politickych veznu. The present structure arose from the reconstruction of, and addition to, a group of buildings termed “Bredovsky dvur” after the earliest surviving structure.Of the three separate buildings, two are reconstructed historical landmarks (in classicist and neo-Renaissance style); the third is an altogether new structure of roughly T-form, constructed around the older fabric. Two open courtyards provide greenery, and a glass-roofed atrium serves as an imposing entrance hall with reception and public facilities for the entire complex. Predominantly consisting of administrative offices and rental space, Bredovsky dvur also boasts nine accommodation units, restaurants, and new parking garages on three below-ground floors.Sipral’s participation in this prestigious commission in the centre of Prague consisted in the supply of all facade claddings for the new building wing, as well as other interior and exterior elements. For facades inside the inter-block – in the open courts – a semi-structural glazing was used, based on the Schüco system. In this system, the horizontal joints are covered with aluminium clamping bars, while vertical joints are filled with structural sealing. Window strips alternate with strips of enclosed coffers; these have a front side of tempered glass with opaque white silk-screen.Semi-structural glazing was also used for enclosure of the roofed atrium with the reception area. Here, the glazed areas alternate with strips of Thermax cladding, used to lower the risk of fire. The outer surface of the Thermax cladding is made of stained veneer, which has a darker shade (bordeaux) in ground-floor of atrium hall, though on other floors it has a lighter shade (birch).Additions inside the courtyards are equipped with a permanent facade cleaning system constructed by the firm Rostek. A platform suspended from a rail above the highest floor can be moved vertically along the wall, thus allowing all facade areas to be cleaned easily and maintained without requiring maintenance personnel to be suspended on ropes.The upper floors of the office bay are equipped with louvers, created by the Hüppe system. If the facade is subjected to excessive sunlight, the louvers are set automatically, to provide shade for the inner spaces; in the event of high wind force, the louvers are rolled up into boxes to prevent damage.Of particular significance for the aesthetic impact of the building is the small glazed Schuco facade with its slight setback, lending a bright note to the addition facing Politickych veznu str. This facade contains atypical louvers – hand-positioned, solid wood lamellas of elliptical cross-section.The facade facing Olivova street, which contains the main entrance, is another interesting element of this building. Granite cladding is used, ensuring a modern and dignified appearance, and providing interest through its specific texture, which is echoed by the arrangement of the individual stone slabs. Divided with a rectangular web of joints and perforated with many window openings, this facade succeeds in maintaining its integrity and compactness.Also realised by Sipral were two skylights in the building: the large skylight above entrance hall, using the Schüco system, is equipped with two walkways, which run along the bottom and upper edges of the skylight and thus allow it to be cleaned. The second fire skylight, of the Hartmann system, is placed at the level of the second floor on the southern side of the building.In addition to the facades and other elements mentioned, Sipral also provided the wooden partitions separating the office and the communication facilities of the new building, classical and sliding doors, display windows, the revolving door to entrance hall, and the automatic door to the garages. All aluminium cladding used for the mullions and aluminium suspended ceilings in the open atriums and attics, or the handrails on the terraces of the upper floors of the new building formed part of Sipral’s commission.