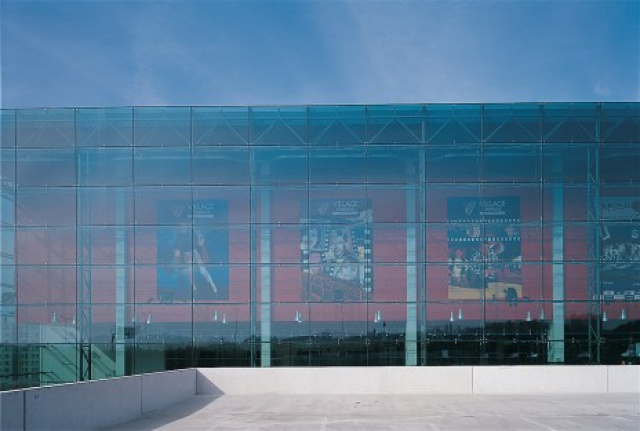 The shopping and entertainment centre in Cerny Most is a dominant building on the area between the eastern edge of the Cerny Most housing estates and the Chlumecka highway. It is an object on rectangular layout, module dimensions of 100 × 56 m, orientated with the longer axis in a direction North-South. Most striking is the glazed, transparent point facade of 2800m2 in area facing eastwards towards the highway by-pass, giving this large building has an aspect of lightness and elegance. The western facade facing the housing estate, as well as part of the lateral facades, is covered with a cladding of sandwich aluminium plates. Sipral supplied the complete facade cladding and all door fillings, though not the steel frame for this building. In structural terms, the Cerny Most Centre is unique in the dimensions of glass panels used for the facade, which according to the architect’s original design were intended to measure 3,4 × 2,25 m. Considering these glass unit dimensions and the extreme stress on the entire system from the loads of prevailing winds and its own weight, it was not possible to use a common, standard, and well-proven solution for the facade anchoring system. Sipral had to find an original solution, which would fulfil all static, functional, and aesthetic requirements. Basic deformations – based on the calculation elaborated for the double-glass unit as a whole with a non-standard number of six point-fixings – determined the thicknesses of glass panels: the outer glass sheet is 12mm thick (Luxguard SN 63), and the inner transparent glass sheet 10 mm thick; between the glass sheets is a 16mm-thick, hermetically sealed air gap. Both glass sheets are tempered. Such a glazing design complied with all static requirements and contributed to a good energy balance within the structure. The choice of the most appropriate type of point fixing also formed a part of model analysis for facade calculations: the ones used are standard points by the Spanish company Bellapart, adjusted to the particular glass panels used. Design and development of the cross node – an element connecting the load-bearing structure of the entire facade with the point fixings of glass units, and thus transferring the required extreme loadings – was the most interesting part of the construction of the Cerny Most Centre, and equally a change for Sipral. As designed, the basic shape of the node was subjected to calculations. After optimisation it was elaborated in 3D modulation; then, a 1:1 scale model was made, necessary for manufacture of the sand forms for casting of the final product. After gaining approval for the proposed design plan for the Cerny Most Centre facade, it was necessary to test the design in an accredited test laboratory. Bearing capacity, deformation, behaviour of cross node and bearing capacity and behaviour of the glass element including point fixings were all tested. The tested elements complied with all requirements and the facade was successfully certified. Also deserving mention is the installation procedure for the glass panels on the facade. The cross nodes were attached to the load-bearing steel structure and rectified in three spatial axes. Glass with prepared point fixings was hoisted by crane using pneumatic multi-point suction cups to the required place. It was then set onto cross nodes and levelled with levelling plates so that it would match with adjoining glass panes; only then was the joint sealing completed. The installation was demanding predominantly because of the handling of glass panels nearly 430 kg in weight, as well as the requirements of its precise placement. Installation work proceeded from both ends of the 100 m long facade towards its centre, meeting at the same time. In spite of effort towards maximum precision of installation, there was a danger that in the last contact the joints would be too large or the glass panels would overlap, but this danger was fortunately avoided. Used for the remainder of the Cerny Most Centre facade was used a cladding of aluminium sandwich boards with a total area of 3200 m, interspersed in several places with window and door openings. Cladding boards were custom manufactured in the non-standard size of 1,25 × 5,25 m. Three automatic revolving doors form the building entrance: two two-chamber ones with a diameter of 4,8 m and one three-chamber revolving door with a diameter of 3,6 m.