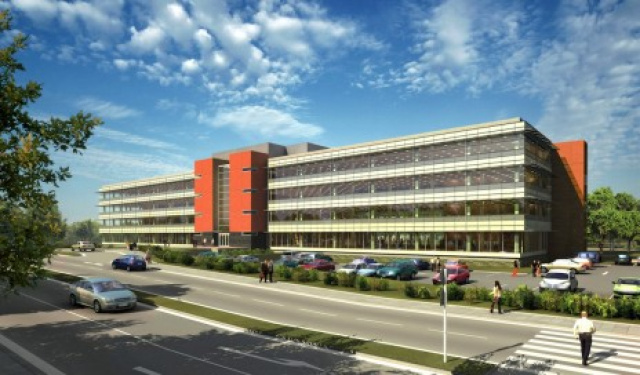 Business Park Zličín is an administrative building consisting of four above-ground floors and one underground floor. It was built on an unused grassy land close to Zličín underground terminal station. The building of 115x34m in ground plan was done by Heberger CZ, a general contractor for Portland Trust, a client. A visual aspect of regular rectangular interspersed with external staircases and entrances into the buidling was carried out by Chapman Taylor, an architectonic office. The project was prepared by Grebner, an engineering and design office.Sipral won a selection procedure for the building envelope thanks to its element facade system that has many advantages when compared to other glazed facade systems used until now. A possibility to execute a bearing structure of the building and at the same time create the envelope elements in the contractor´s assembly hall resulted in fast closure of the building (by whole floors or selected stages along the whole height of the building), immediate start of interior works and the work hand-over  in a short time. Functionality of the element facade and the profiles present the work of Sipral´s internal development under cooperation with Schüco.The envelope consists of the main element facade bordering the whole building on the outside with element fields of 1500mm, and the 1st floor is „imbedded“ when compared with the higher floors and element facades of two inner atriums roofed with large-sized skylights. The facade glazed area is „broken“ with 130mm deep covering strips in a shape of half-parabolas that dominate the horizontal elements and U-shaped strips on the odd vertical joints. Another element that interrupts the area from the functional point of view consists of 1100mm wide meshed floors supported with varnished steel subtle blades and connected by tension rods into horizontal elements located one level above. These serve for two goals: as the external shading (internal shading is provided by interior louvres integrated in the facade space and at the same time for cleaning and maintenance of the facade.Another interesting item is diversity of non-transparent panels, combination of structurally glued enamelled glass units or insulating panels in composition of transparent glass sheet – varnished sheet, that create a spatial impression.  The non-transparent interior areas were clad with set-off timber cladding. The upper ending of the facade consists of ventilated bond parapets while the bottom detail is either made of transition to contact warming-up spreaded plaster system or connection to the terrace floor tiling.    In the facade there are inside-tilting openings that are mechanically controlled with tension rods. A corner detail was probably the hardest nut to crack since the architect required to eliminate vertical corner facade profiles in combination of structural connection of insulating double-glass units, single enamelled glass units or insulating panels together with vertical stainless tension rods stretched between horizontal profiles and in addition to that there was a requirement of uniterrupted meshed floors comming from both sides of corners.  A groundfloor Promat stick system facade is a completely atypical structure. This fire-rated steel structure stretches over several ground-floor fields and shall be indistinguishable from a common elements facade when viewed from the exterior and the interior. The structure follows on the element facade smoothly in all details including the identical vertical joint. Thanks to the building design also this requirement was succesfully met. Other divides are done by fire zones of atrium vertical walls that were designed in a variant of fire-rated stick system facade (fire-rated glass units + inner panels of aluminum profiles), that are again visually indistinguishable from the surrounding element facade.Large-sized skylights roofing over spaces of both atriums were system-designed, i.e. made of Schüco FW50 aluminum profiles with safety glazing. External shading was done with Schüco aluminum louvers. Interior space of glazed panels was later complemented with inner shading by sliding canvases.We also made fire-rated windows at the escape spaces, interior glazed cladding of bearing walls of entrance spaces, glazed railings of exterior staircases or complex covering of certain staircases with expanded metal with its own bearing steel structure along the whole height of the building.Having solved all complicated details and several contradictory requirements of various regulations or sub-deliveries we succesfully completed the work and it stills attracts views of passers-by since for them it is still a mystery how cars can get inside the building through glazed element shop windows. By the way, Sipral had to modify these later since it was demanded during the building use without changing the original design visual appearance.